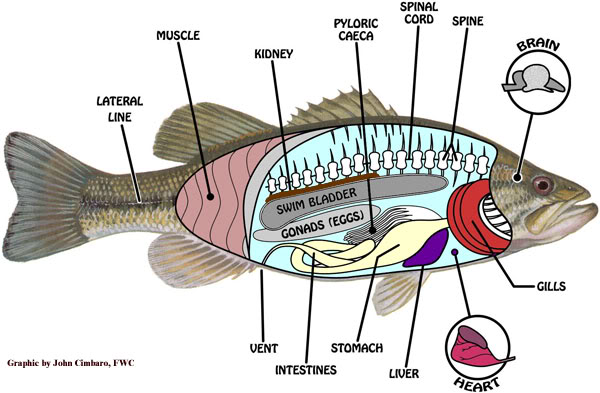 sick fish and what you can do:

Fish can become ill and sick from many different things. There are also numerous different types of medical issues that can happen to fish and other life within the aquarium. Below we will cover some of the common things that can happen to fish. Some are more common than others, and almost all are curable in some way. There are literally dozens of different parasites and diseases that can kill fish, below we have listed some of the more well-known problems.. the best thing to do if you notice anything odd about your fish is to act QUICKLY... problems happen fast in the marine environment so time is not always on your side.

To find a cure for a sick fish, we must first ask these questions:

- What type of disease or sickness is affecting my fish?

- What are the water parameters when tested?

- What is needed to cure the problem?

There is a difference in what some of the diseases look like and more importantly how to cure them. Most sickness and disease in fish can be handled with regular water changes, good aeration and good food. A strong immune system is important for any creature. Making sure the lights are off at night, that the fish aren't overfed, that there is good filtration and water flow...these are all good ways of ensuring a healthy and happy fish aquarium. Saltwater diseases may look the same but sometimes must be treated differently because of the additional balance within the saltwater environment. Having good equipment, things like a water skimmer as mentioned here, will help to keep the water conditions in top shape. If you ever need to use medications to fix and cure fish problems, make sure to always follow the directions closely, usually you must remove carbon from filters and do large water changes in unison with the medications but each one is different.

Hole in the head can be a real problem for the affected fish, especially if it has developed a lot. Small holes appear on the forehead and around the mouth, and the holes can get very deep. The other name for this is 'Head & Lateral Line Erosion' because typically the lateral line of the fish will also be affected. A row of small holes will form all the way down the side of the fish. 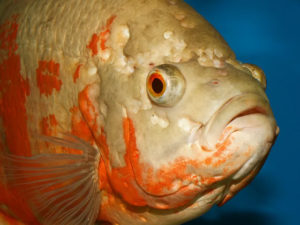 Where does HITH/HLLE come from? Hole-in-the-head and the causes are not fully understood and agreed upon in the fish-keeping world. There are many theories but so far we have not been able to isolate a true cause. However, it has been narrowed down that more than likely these problems come from very bad water quality and poor food over long periods of time. Some say that using activated carbon also contributes to the HITH problem. Changing the carbon often is important, especially for bigger fish. If you have a fish forming holes like this, it might be worth stopping the carbon use and doing more water changes until it gets better. Over time the holes will heal and almost go back to normal. Some scarring might still occur. HITH/HLLE is common in Oscar cichlids but can be a problem to any fish if the situation presents itself.

Lice on fish is just as it sounds.. Small, pale crab-like creatures attached to the fish. Fish with Lice will become irritated and it will impact the sleep of the fish. Sometimes when effected by Lice you can see the fish strike things in the tank in an effort to remove them. Lice pierce the flesh of the fish and feed on the host for long periods of time. Regular examination of your fish can catch things like this in the early stages. 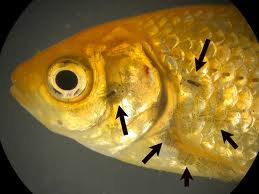 Where do Lice come from? Usually Lice are found in ponds and outdoor water sources, so if a fish is brought in from an outside source it is possible it could have Lice. It is important to treat for them as soon as they are noticed, they can spread rapidly and can cause issues for a long time. The Lice are sometimes big enough to where you can capture the sick fish and carefully remove the parasite from it.

Anchor Worms on fish are similar to Lice in that they burrow into the flesh and feed on the host for long periods of time. The eggs that the anchor worms leave behind hatch quickly and can spread throughout the aquarium. Fish will hit themselves on objects in the tank trying to remove the parasites. You will be able to see small white threads coming out of the fish's scales. 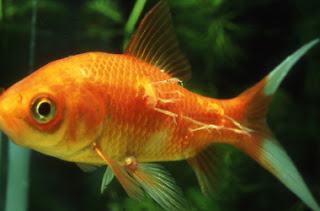 Where do anchor worms come from? Typically anchor worms are coming in from another affected fish. They are not very common but can spread quickly. Treatment includes physically removing the parasite from the fish just as with the Lice mentioned above. Another technique is bathing the fish in a saltwater rinse (30-35 pp) for about 5 minutes each day for several days until the anchor worm leaves the host.

Fungus is a serious problem in the aquatic fish-keeping world. As with anywhere else in nature, Fungus can happen quickly and the damage can be permanent. In the beginning, you will see a grey or white growth, sometimes in patches, around the fish's body. As the fungus progresses it will eat into the meat of the sick fish and kill it. So, action must be taken when fungus is seen within the aquarium. 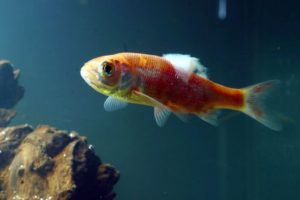 Where does Fungus come from? Fungus is known to start growing on fish that are stressed and undergoing extreme environment changes. Just as with the Ick, fungus can be treated with antibiotics and medication over several days. Make sure to remove all carbon before treating, and follow the directions of the product closely. Sick fish are always more prone to developing fungus and ick infections.

Ich is probably one of the most common issues in modern fish-keeping. It's a disease that can spread to all the fish in the tank, although sometimes it will only effect a few of the fish in the tank. You will notice small grain sized spots that look like small sand particles. As with most other diseases, the fish will probably strike objects in the tank because of the irritation. The fish will sometimes keep its fins clamped and gasp at the water's surface. 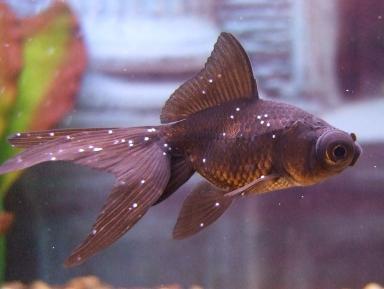 Where does Ich come from? Quick temperature changes and fluctuations in pH and nitrates are known to cause ich to spread rapidly. Treatment for fish ich includes using an antibiotic cure or general cure such as 'ich guard', also make sure to remove carbon, add the directed amount and follow the directions closely each day. Keeping good water quality can inhibit things like ich from growing in the aquarium.

Fin Rot is another common problem in aquariums. Rotting fins can be very easy to spot as usually this problem moves quickly. The fish affected will usually seem lethargic and slow moving, or may even just sit idle at the bottom of the aquarium. Fin Rot is caused by a bacteria that is infecting the fins, especially if the fins are being nipped by other tank mates.  Feeding high quality foods will help to keep your fish healthy and strong. If you only ever feed flake food, consider switching it up depending on what your fish will like. 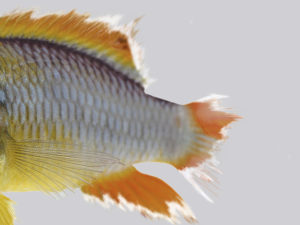 Where does Fin Rot come from? Poor water quality is usually the main reason behind fin rot, although excessive stress and bullying also seems to contribute to it.. medicine treatments include things like "tetracycline" but remember you must remove carbon and do more water changes. As always, follow the recommendations on the label. Using medicine on fish can be a delicate process.

There are numerous other diseases and problems fish can get, such as: Oxygen starvation-(will typically gasp at the surface, need more air bubbles), Pop-Eye-(eyes bulge due to a bacteria infection), Velvet-(looks like ich but smaller yellow/gray spots) and Ammonia Poisoning-(red, inflamed gills, gasping for air at surface, usually caused by new tanks). In addition to these there are several different types of worms and parasites the fish can get too, especially outside pond fish. As always, inspect your fish daily and act quickly if anything doesn't look right.